In his professional life, BJ Nicholls is an advertising designer; but in his spare time he, along with is wife Lori, is a volunteer fossil preparator at the Natural History Museum of Utah.  What does that entail?

Most fossil discoveries require a tremendous amount of preparation work after a specimen is excavated.  Fossils are typically brought back to preparation labs with little of the fossil exposed.  We’ve been trained to remove the surrounding rock (called matrix) and to stabilize fossil bones that are often in very poor condition.

Preparation tools include dental picks, scalpels, brushes, and even microscopes for very precise detail work. We also frequently use air-powered tools that range small carbide-tipped scribes to large jackhammer-like tools. A single fossil block will often require both aggressive “demolition” of hard rock matrix and extremely careful and precise techniques to preserve the finest details of a specimen.

BJ has worked on some fantastic specimens, including several new species — dinosaurs from Utah’s Grand Staircase-Escalante National Monument.  Here is one of the most spectacular:

Meet Gryposaurus monumentensis — the actual fossil is on display and bones are removable from a steel armature for study. The skull is a reproduction since the real skull’s weight would require a massive structure to support. This skeleton is about as complete and well-preserved as the famous “Sue” tyrannosaur at the Field Museum in Chicago. But unlike Sue — which was commercially collected, purchased by the Field Museum for $8.2 million dollars, and professionally prepared at a special lab built just for the Sue project at Disney World — the Grand-Staircase Gryposaurus was collected from public lands at negligible cost and prepared by scores of volunteers who collectively provided many thousands of hours to bring this specimen to light.

I’m proud to have done my small part in this truly massive, and mostly volunteer, effort.

Experiences like that have left BJ with an abiding interest in learning more about paleontology.  So one reason he needs access to published research is just that he’s interested in it.  But it’s more than that: he applies his increased knowledge to be a more effective, creative, and productive volunteer:

Since the NHMU prep lab and workers are on display as part of the paleontology exhibits, I often engage the public.  I’m a much better ambassador for the museum and the science if I have the opportunity to educate myself via open-access publications.

But what about in the actual preparation work? 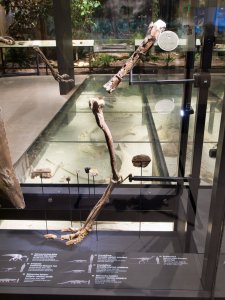 Hind limb of an ornithomimid dinosaur

I’ve been frustrated looking for information about ornithomimids [the “ostrich dinosaurs”] since I’ve been working on one for over a year now.  I was specifically looking for images of bones of the pelvis since I’m working on pelvic material in very hard matrix.  Being able to visualize the bones would help me navigate around the fossil bone with diamond saws and larger air tools more safely.  It’s always helpful to have a roadmap to the shapes of bones you’re uncovering. These bones are delicate, and will be easy to damage as I work around them with powerful tools.

The problem is that as BJ tries to dig out the papers he needs to guide his work — to ensure he doesn’t damage literally irreplacable fossils — he keeps running up against online paywalls. There’s not much he can learn from abstracts, and as an unpaid volunteer with no budget, he really can’t justify buying access to papers at $30 each.

I very much appreciate having open online access at PLoS ONE to many excellent papers.  While I don’t have mastery of the technical language in papers, that’s a challenge that I’ve mostly been able to overcome using web search and persistence.

The ranks of people like me expand with access to information. Science benefits as it gains “civilian” allies who contribute time, creativity, political support, and even money to their fields of interest.  We really need more science literacy and appreciation across all demographics. Open access tears down barriers, perhaps more than any other education strategy.  Armed with an open Internet, more people than ever will be able to participate in scientific interests as amateurs, volunteers, or even just as a growing and more serious audience for the sciences.

We’ll leave you with another view of that magnificant Gryposaurus skeleton — made available by volunteers like BJ and Lori, working without adequate access to the research that they need. 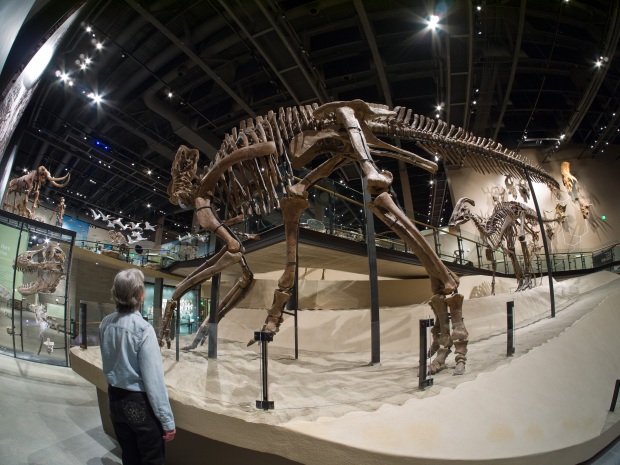